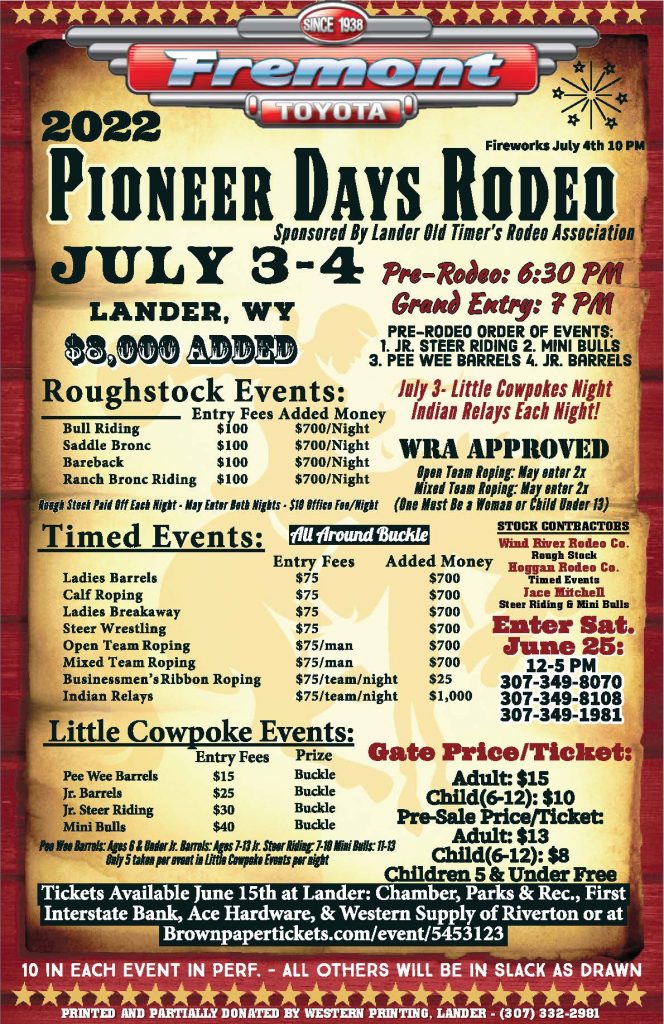 2022 Pioneer Days Rodeo Program (If you entered late, your name will not be in the program)

Make sure to stick around for the fireworks show put on by the Lander Rural Fire Dept. 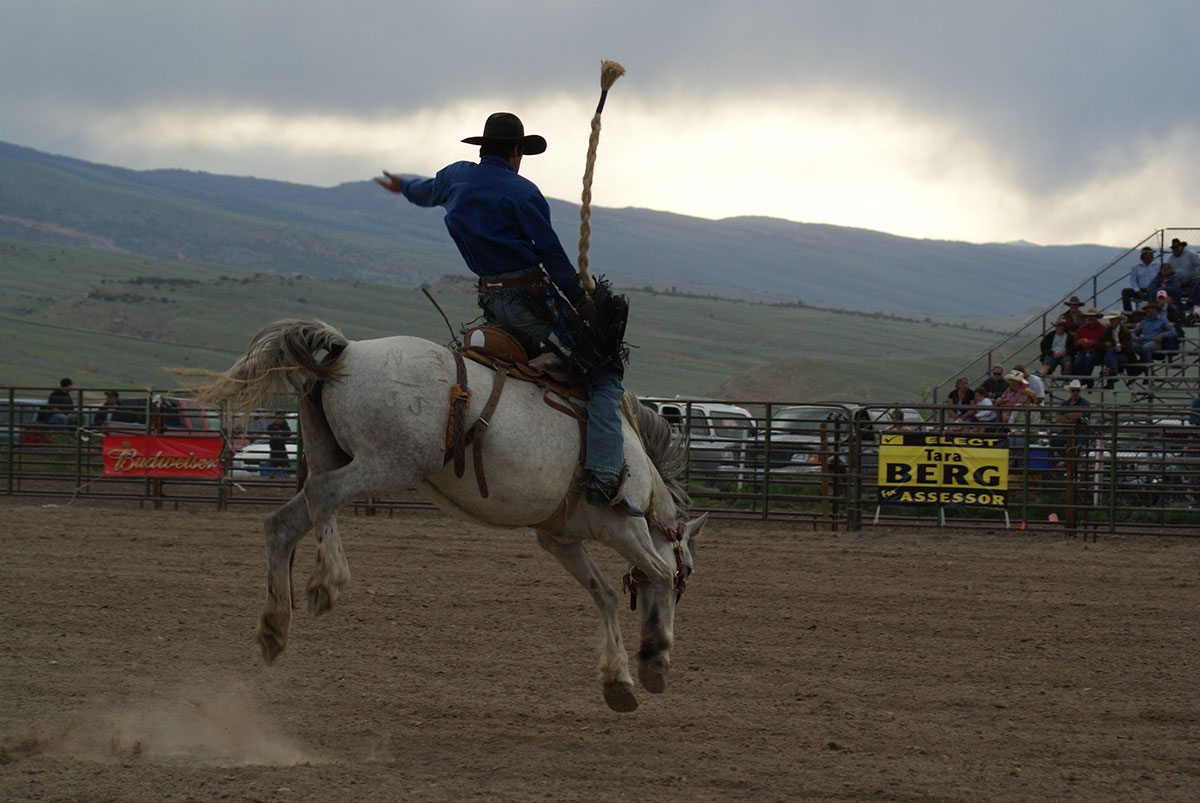 Lander, Wyoming's Pioneer Days Rodeo pre-dates Cheyenne Frontier Days by three years.  It began in 1894 and was held three miles south of Lander on the Bill O'Neal ranch.  It consisted of a ten-mile relay race with three teams.  Each team consisted of five horses and each horse alternating had to run two miles.  Participants included Bob Gaylord, Lish Hinton, and Jack Rogers.  Hinton, who was a well known cowboy in the area, won the race.

For a while early rodeos were held on the Lamoreaux ranch on the hill above Lander (Jules Lamoreaux's home was located on the approximate site of where Western Printing now stands) and were often run by Lamoreaux's son-in-law, Ed Farlow.   Farlow later built a grandstand and a half-mile track on his place in west Lander around 1900 (close to the site of the new Middle School on North 8th Street).  A handy pocket-sized guide to the "goings-on" was published in 1902 by the Palace Pharmacy--the winner of the bucking broncho contest was to receive a $125 Lander-made silver-mounted saddle.  Ed Farlow was the main promoter of the rodeo, along with his sons Jules and Albert "Stub".  Stub became a well known bronc rider and is thought to have provided the inspiration for the cowboy on the bucking horse on Wyoming license plates.  By 1912 the celebration was known as "Rocky Mountain Round-Up Days" and was called that for several years.  Clayton Danks, among some of the few men along with Stub who rode the legendary bronc Steamboat, was specializing that year in bulldogging--he later served as Fremont County Sheriff from 1936-50.   For many years the Northern Arapaho and  Eastern Shoshone Tribes put on dances at Third and Main Street and in 1916 staged a sham battle.   In 1920 the rodeo grounds were moved to the George Wroe  ranch  (close to where the current Lander Valley High School,  Pioneer Museum and Museum of the American West now stand).

A larger grandstand accommodated the crowd in 1925 and they were treated to a range cow milking contest, cowgirl chair race and goat roping contest.  Fifty members of the Ute tribe joined up with the Shoshone and Arapaho Tribes and made up three tent cities around town.  Former area cowboy and new silent screen film star, Colonel Tim McCoy, came to visit the Tribes.  There were several times the local Tribes "saved the day" for the celebration--in 1932 during the Great Depression, locals seriously considered not having a celebration.  The  two Tribes pitched in and offered to put on the entire celebration.   In 1934 things were looking up and the largest crowd in four years turned up.  Leona (Robinson) Bybee was selected Miss Lander and this was the first year the rodeo was held at the current rodeo grounds.

In November 1934, the Pioneer Days Show was adopted by the Chamber of Commerce and the organization called for nine directors and was incorporated.    Rough times came again during World War II and it looked like the celebration would not be held, but again 200 members of the Shoshone and Arapaho Tribes helped put on the 4th of July parade and rodeo.  Each year, Ed Farlow, partriarch of the Pioneer Days rodeo and celebration, continued to participate in some way--he made his last appearance in the parade of 1950 and passed away at the age of 90 in April, 1951.

The Lander Pioneer Days rodeo has continued over the years in the location on the hill above Lander where it has been for over 80 years.   The rodeo saw it's 121st year in 2014 and continues to be a hallmark of the days when Lander was known as the place "where rails end and trails begin."  The rails are gone, but the trails, cowboys and rodeo remains going strong.